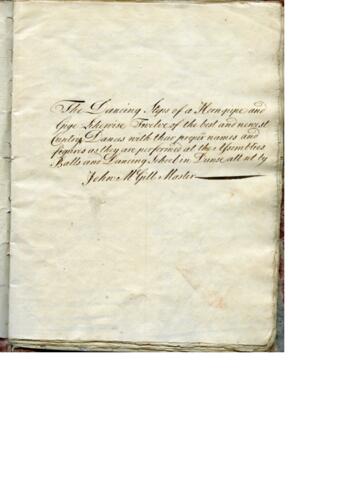 A MS (ca 1752 ) written by John McGill, Dance Master. The Manuscript lists Minuets and Reels used at his school in Dunse, steps for the Hornpipe and Gige, and twelve country dances viz: The Cameronians March; Because he was a Bony Lad; Jock the Drummer; Lady Macikintoishes Reel; Ephy Macnab; Old adge and young; The Cadgers in the Canongate; Kilkubright; Jack Hoomes Reel; The Colonel;; Just as I was in the morning; My Wife's a wanton wie thing; The Dustie Millar; The Short Appron; The Carl he cane o'er the Craft; Jokie's lost his DearieThe Malt man; The Dutch Supper; The Lads of Dunse; Steer the Gile

Existence and location of originals

Existence and location of copies