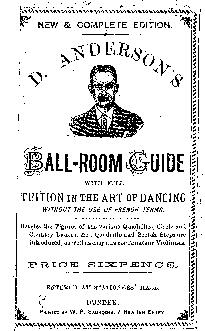 By Christine Norman & John Bayle (editors). Published by The Imperial Society of Teachers of Dancing Inc.

"Collection of Reels" Lowe's Selection of Popular Country Dances; with Their Proper Figures as Danced in Fashionable Society. To which is added a Favorite Quadrille, Polka, Waltz, Schottische etc. etc.

By Hugh Foss with music arranged for the piano and piano-accordion by Peter White, 1961. Published by Hugh Foss.Copy belonged to Bill Ireland

By Hugh Foss with music arranged for the piano and piano-accordion by Peter White, 1963. Published by Hugh Foss

Clipper Ships and Other Dances

By Roy Goldring (devised by). Published by Scotscores

By John Fitzhugh Millar. Published by Thirteen Colonies Press, Virginia.History, directions and tunes for 203 longways dances and 47 square dances of early America, Canada and the Caribbean, together with clothing patterns

By Thomas Bray. Printed by William Pearson for the AuthorIncludes The Scotch Measure, a New Country Dance

Critical Observations on the Art of Dancing

By Giovanni-Andrea Gallini, printed for the author. "To which is added, A Collection of Cotillons or French Dances". Peel ref.: G03

By Priscilla Burrage and Sylvia Miskoe

Dance Till Dawn Once More

Dance with a Friend Eleven Dances from the Canadian Prairies

Dances for the Seven to Eleven-Year-Olds

By Maud Karpeles and Lo?s Blake. Published by Max Parrish & Company, LondonOne of a series: Handbooks of European National Dances

Dances to the music of Angus Fitchet

KTG - know the game series. Produced in collaboration with the English Folk Dance and Song Society.Twelve dances with music. An introduction to English Country Dancing.

Entente Cordiale and Berwickshire Round Reel

Extract from 'Folk-Dances and Singing Games'

By Ellis Rogers. Published by the author

By Freeland Barbour (editor). Published by Bonskeid Music in conjunction with the recording 'Footnotes' by The Occasionals

For the Further Improvement of Dancing A Treatis of Choreography or ye Art of Dancing Country Dances after A New Character, in which The Figures Steps, & Manner of Performing are describ'd & ye Rules Demonstrated in a Easie Method

By Alastair MacFadyen & Alan Macpherson (editors).A facsimile reproduction of the original MS with an illustrated commentary.

A Book of Seven (plus two) Scottish Country Dances

By Published by Acair Ltd, Isle of Lewis.Dancing in the Hebrides, handed down from Ewan MacLachlan, 19th century Dancing Master and transcribed by Mats Melin

By Peter A White editor. Published by Caber Feidh Publications

By D G Maclennan. Published by Scotpress.Research on traditional dancing written by an experienced dancer

How to Dance the Old Dances:?A New Edition of R. Coote's Famous Ball Room Guide : Illustrated with the Original Figures, Diagrams and Hints on Deportment

If The Ghillie Fits ?

By Ann Skipper and Neil Stewart McLeod (selected by). Published by Skipper/McLeod, California.Collection of dances with connections to MacLeod dances. Includes the story of each dance, choreographic diagrams and the musical score for the primary ...

In Celebration of Dance - A Collection of Scottish Country Dances

Let's have a Ceilidh, revised edition

Let's Have a Ceilidh: Guide to Scottish Dancing

Longman & Broderip's Fourth Selection of the most favorite Country Dances, Reels etc. with their proper Figures, for the Harp, Harpsichord & Violin as Performed at the Prince of Wales's, Bath & other Grand Balls & Assemblies